Find Your own Space

Find Your own Space 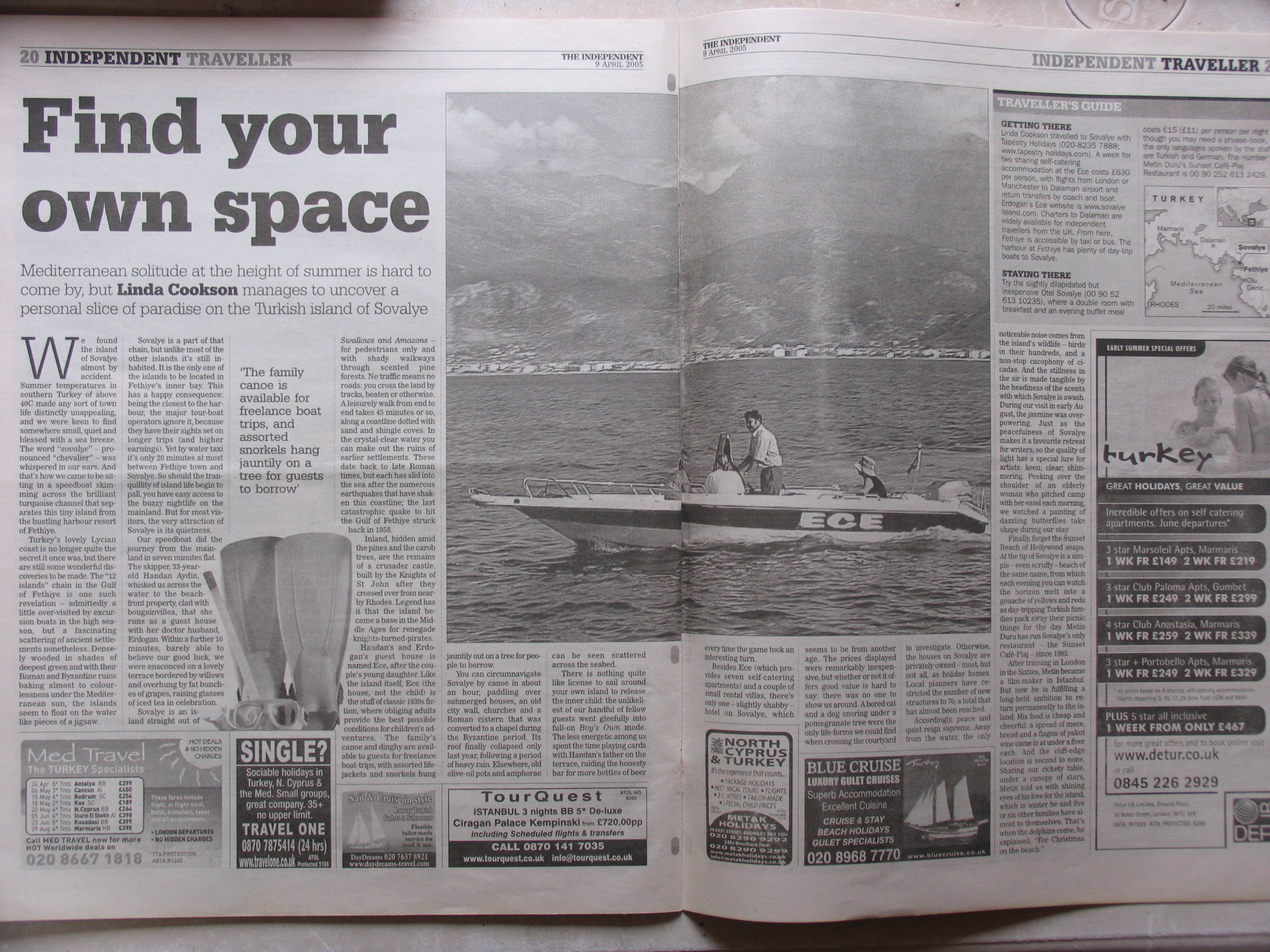 Mediterranean solitude at the height of summer is hard to come by, but Linda Cookson manages to uncover a personal slice of paradise on the Turkish island of Sovalye

We found the island of Sovalye almost by accident. Summer temperatures in southern Turkey of above 40C made any sort of town life distinctly unappealing, and we were keen to find somewhere small, quiet and blessed with a sea breeze. The word 'sovalye' " pronounced 'chevalier' " was whispered in our ears. And that's how we came to be sitting in a speedboat skimming across the brilliant turquoise channel that separates this tiny island from the bustling harbour resort of Fethiye.

Turkey's lovely Lycian coast is no longer quite the secret it once was, but there are still some wonderful discoveries to be made. The '12 islands' chain in the Gulf of Fethiye is one such revelation " admittedly a little over-visited by excursion boats in the high season, but a fascinating scattering of ancient settlements nonetheless. Densely wooded in shades of deepest green and with their Roman and Byzantine ruins baking almost to colourlessness under the Mediterranean sun, the islands seem to float on the water like pieces of a jigsaw.

Sovalye is a part of that chain, but unlike most of the other islands it's still inhabited. It is the only one of the islands to be located in Fethiye's inner bay. This has a happy consequence: being the closest to the harbour, the major tour-boat operators ignore it, because they have their sights set on longer trips (and higher earnings). Yet by water taxi it's only 20 minutes at most between Fethiye town and Sovalye. So should the tranquillity of island life begin to pall, you have easy access to the buzzy nightlife on the mainland. But for most visitors, the very attraction of Sovalye is its quietness.

Our speedboat did the journey from the mainland in seven minutes flat. The skipper, 33-year-old Handan Aydin, whisked us across the water to the beach-front property, clad with bougainvillea, that she runs as a guest house with her doctor husband, Erdogan. Within a further 10 minutes, barely able to believe our good luck, we were ensconced on a lovely terrace bordered by willows and overhung by fat bunches of grapes, raising glasses of iced tea in celebration.

Sovalye is an island straight out of Swallows and Amazons " for pedestrians only and with shady walkways through scented pine forests. No traffic means no roads: you cross the land by tracks, beaten or otherwise. A leisurely walk from end to end takes 45 minutes or so, along a coastline dotted with sand and shingle coves. In the crystal-clear water you can make out the ruins of earlier settlements. These date back to late Roman times, but each has slid into the sea after the numerous earthquakes that have shaken this coastline; the last catastrophic quake to hit the Gulf of Fethiye struck back in 1958.

Inland, hidden amid the pines and the carob trees, are the remains of a crusader castle, built by the Knights of St John after they crossed over from nearby Rhodes. Legend has it that the island became a base in the Middle Ages for renegade knights-turned- pirates.

Handan's and Erdogan's guest house is named Ece, after the couple's young daughter. Like the island itself, Ece (the house, not the child) is the stuff of classic 1930s fiction, where obliging adults provide the best possible conditions for children's adventures. The family's canoe and dinghy are available to guests for freelance boat-trips, with assorted life-jackets and snorkels hung jauntily out on a tree for people to borrow.

You can circumnavigate Sovalye by canoe in about an hour, paddling over submerged houses, an old city wall, churches and a Roman cistern that was converted to a chapel during the Byzantine period. Its roof finally collapsed only last year, following a period of heavy rain. Elsewhere, old olive-oil pots and amphorae can be seen scattered across the seabed.

There is nothing quite like license to sail around your own island to release the inner child: the unlikeliest of our handful of fellow guests went gleefully into full-on Boy's Own mode. The less energetic among us spent the time playing cards with Handan's father on the terrace, raiding the honesty bar for more bottles of beer every time the game took an interesting turn.

Besides Ece (which provides seven self-catering apartments) and a couple of small rental villas, there's only one " slightly shabby " hotel on Sovalye, which seems to be from another age. The prices displayed were remarkably inexpensive, but whether or not it offers good value is hard to say: there was no one to show us around. A bored cat and a dog snoring under a pomegranate tree were the only life-forms we could find when crossing the courtyard to investigate. Otherwise, the houses on Sovalye are privately owned " most, but not all, as holiday homes. Local planners have restricted the number of new structures to 70, a total that has almost been reached.

Accordingly, peace and quiet reign supreme. Away from the water, the only noticeable noise comes from the island's wildlife " birds in their hundreds, and a non-stop cacophony of cicadas. And the stillness in the air is made tangible by the headiness of the scents with which Sovalye is awash. During our visit in early August, the jasmine was overpowering. Just as the peacefulness of Sovalye makes it a favourite retreat for writers, so the quality of light has a special lure for artists: keen; clear; shimmering. Peeking over the shoulder of an elderly woman who pitched camp with her easel each morning, we watched a painting of dazzling butterflies take shape during our stay.

Finally, forget the Sunset Beach of Hollywood soaps. At the tip of Sovalye is a simple " even scruffy " beach of the same name, from which each evening you can watch the horizon melt into a gouache of yellows and reds as day- tripping Turkish families pack away their picnic things for the day. Metin Duru has run Sovalye's only restaurant " the Sunset Caf-Plaj " since 1995.

After training in London in the Sixties, Metin became a film- maker in Istanbul. But now he is fulfilling a long-held ambition to return permanently to the island. His food is cheap and cheerful: a spread of meze, bread and a flagon of yakut wine came in at under a fiver each. And the cliff- edge location is second to none. Sharing our rickety table, under a canopy of stars, Metin told us with shining eyes of his love for the island, which in winter he and five or six other families have almost to themselves. That's when the dolphins come, he explained. 'For Christmas on the beach.'

Linda Cookson travelled to Sovalye with Tapestry Holidays (020- 8235 7888; www.tapestry holidays.com). A week for two sharing self- catering accommodation at the Ece costs pounds 630 per person, with flights from London or Manchester to Dalaman airport and return transfers by coach and boat. Erdogan's Ece website is www.sovalyeisland.com  Charters to Dalaman are widely available for independent travellers from the UK. From here, Fethiye is accessible by taxi or bus. The harbour at Fethiye has plenty of day-trip boats to Sovalye.

Try the slightly dilapidated but inexpensive Otel Sovalye (00 90 52 613 10235), where a double room with breakfast and an evening buffet meal costs EUR15 (pounds 11) per person per night " though you may need a phrase-book, as the only languages spoken by the staff are Turkish and German. The number for Metin Duru's Sunset Caf- Plaj Restaurant is 00 90 252 613 2429.

Provided by ProQuest Information and Learning Company. All rights Reserved.